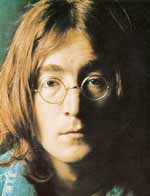 They may win all the plaudits for Best Group but the Beatles didn't have the three songs which would make me turn up the radio and only one of the four members went on to satisfy my criteria.
While it is interesting to see the Beatles journey through the 60s from cocky young men to long haired hippies, John never seemed to come out from the hippy phase and his solo efforts held some real belters which showed who was the real song writing talent in the Beatles.
'Just Like Starting Over' has a great bassline running all the way through it and is a song about going back to the start of a relationship, not sure how Lennon fouled up with Yoko but it's a proper 'oops sorry, i messed up so shall we start again' type song.
In the powerful 'Imagine', Lennon is asking us to consider a place where things that divide people (religion, possessions, etc.) don't exist although at the end he admits it's just a nice dream while 'Jealous Guy' lays bare the raw emotions of the insecurities of loving someone so much that you risk losing the other person.
Posted by Falling on a bruise at 20:44