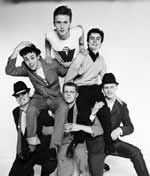 
Madness
Qualifying Songs: One Step Beyond, The Prince, Baggy Trousers

Madness were a band who went from amazing to awful almost overnight, from 1978 to 1981 they were a brilliant ska band and then suddenly and unexpectedly, they changed direction to a more pop sound and it was all 'Wings of a Dove' and 'My Name Is Michael Caine' and by 1986 they had split.
'One Step Beyond' is probably their most famous, and best, song, a fast ska sound with a bass running up and down the scales while a saxophone blasts away and its almost impossible to hear without wanting to do that little jerky side to side dance they did which can be embarrassing queueing at the checkout in Sainsbury's.
'Baggy Trousers' has that same ska sound they mastered so successfully to start with as did 'The Prince' which was their first single in 1979 and was a tribute to Jamaican ska singer Prince Buster, whose song the band took their name.
Then it all went southwards but they are back again now and it is the pre-82 hits that they play at reunion shows which proves that although some bands mature and change style successfully, sometimes it is best to stick to what you know because the Nutty Boys matured but the style change did them no favours whatsoever.
Posted by Falling on a bruise at 17:47

There are a handful of instrumental songs I like but on the whole I prefer songs with lyrics.