Lucy Museum of Musicians - The Platters 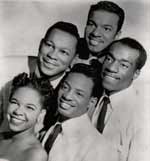 The Platters
Qualifying Songs: My Prayer, Only You, Smoke get in Your Eyes

There are many arguments about the greatest ever male singing voice but you would need to go a long way to find anything better than the silky vocals of Tony Williams who is mainly the reason this band make it into my museum.
The sublime ballad 'Only You' is the ultimate love song and not far behind it is 'Smoke Get's In Your Eyes' which is more of a vehicle for William's soaring voice without the vocal backing of the rest of the group who to be honest were just making up the numbers.
'My Prayer' sounds very similar to 'Only You' but Williams let's rip with his voice and halfway through, the key change makes the hairs on your arms stand up, it really is that good.
Such was Williams influence that when he left the group the record label refused to release any more Platters records and just released their previous songs with Williams singing.
The joy of the Platters is that their ballads are not break up songs but rather celebrate being in love and being with someone you cherish and quite rightly are still one of the most successful vocal groups ever with a string of hits that prove the label is correct even if Tony Williams, essentially, was The Platters.
Posted by Falling on a bruise at 17:23