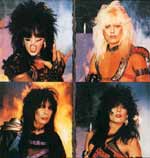 Mötley Crüe
Qualifying Songs: Shout At The Devil, Too Young To Fall In Love, Wild Side

Between the massive substance abuse, sexual escapades and general decadence, Mötley Crüe somehow put out some cracking rock songs in the 80s although they were relatively unknown this side of the Atlantic.
Mick Mars pounding guitar riffs dominates on all their songs and 'Shout At The Devil' starts with a pounding riff driven intro and because the lyrics include the word 'Devil', religious types alleged it encouraged Devil worship but it was more likely to encourage deafness as it is a song that if the neighbours aren't banging the wall and screaming at you to turn that racket down, you aren't playing it loud enough.
'Too Young To Fall In Love' is another guitar and drum dominated song about being too young to fall in love obviously and 'Wild Side' takes a poke at the religionists who decried their previous Beelzebub themed song and throws every religious term into it and mangles part of the Lord Prayer, take that Bible bashers.
The songs may sound as good today as they did back then but the video's scream 80's Hair Band which reminds you why the 80's was not the friend of wannabe cool rock bands.
Posted by Falling on a bruise at 20:35