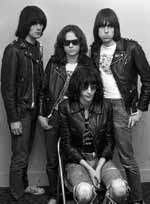 When i was learning how to play the guitar my instructor would teach me a new song each lesson so to my parents it would look like he was worth what they were paying him to teach me. What they didn't know was that many punk songs were of the 3 chords type and the Ramones were a favourite because as long as you could make D, E and A you could play their songs.
The group never strayed far from the same formulaic tunes but like some bands, the tune they discovered was a great one and they span many great songs out with pretty much the same tune.
The frantic 'Blitzkreg Bop' is a must for any budding guitarist as it's fast, exciting and sounds great while being easy to play but then you could say that about most of their songs.
If ever there was a song which had a theme that i could support it is 'I Don't Want To Grow Up', a turgid Tom Waits song which the Ramones turned into a thumping, non-stop anthem listing the reasons why they don't want to grow up and ends on the stinging line 'How the hell did it get here so soon' which is my lament every birthday.
If you don't find yourself sliding across the kitchen on your knees while playing air guitar when this comes on the radio then you are a grown up already and it's too late for you.
'Rock N Roll High School' always sounds to me like the sort of song the Beach Boys would do if they turned punk with lyrics about cars, girls, school and not wanting to learning history all wrapped up a tune with less chords then Joey had limbs.
Posted by Falling on a bruise at 20:33