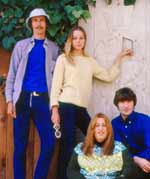 If ever there was image of a band which didn't fit with was going on behind the scenes it was The Mamas and Papas. Far from being the clean cut band they portrayed they were bonking each other and at one stage went off to live on an island for a year doing a quantity of drugs that even Lindsay Lohan would blanch at.
The song, 'I Saw Her Again last Night' was written by John Phillips for band mate Denny Doherty to sing as punishment for an affair he had with his wife and fellow band member Michelle Phillips which must have stung every time he saw that on the song list.
Denny Doherty admitted that he was so out of his gourd at the height of their fame that he can't remember much about the whole being in a band thing while Mama Cass only stopped doing drugs long enough to eat large quantities of food which finally done for her.
'California Dreamin' is probably their best know song and is all longing for the warmth of Los Angeles while being stuck in a cold wintery New York City while 'Monday Monday' is just a three minute moan about Monday mornings which is fair enough, Monday mornings are bloody 'orrible.
Posted by Falling on a bruise at 18:00