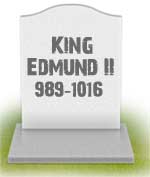 As i followed my father to the throne, and as his nickname was Ethelred the Unready, i was always going to be a vast improvement and proved myself made of much sterner stuff than my predecessor, earning the surname 'Ironside' for my staunch resistance to a massive invasion led by the Danish King Canute who was confusingly married to my auntie Emma.
My father sought to buy off the Danes who where occupying northern England to stop their raids into his kingdom, but this just emboldened the
horned helmeted ones, who upped their demands for more and more gold, and kept on raiding his domain anyway.
The main antagonist was Sweyn Forkbeard who took the throne from my father but died shortly afterwards so i took over but Forkbeard's son, Canute, came to take it back and in tow he had my former step-mum, i always knew there was something about her i didn't much care for.
I playing a leading role in chasing him and his hordes out of England, repelling the rampaging mob until one night when i made a trip to the little boys room, or the little boys hole in the ground to be accurate.
Unbeknown to me, one of Canute's assassins was waiting in the cesspit for the royal posterior to show up. When i sat down to do my business, the assassin stabbed upwards with a sharp dagger, and leaving the weapon embedded in my bowels, made his escape.
Unfortunately for me, my sides may have been made of iron, but my bottom certainly was not .
I don't know what the weirgold punishment is for injuring a backside and killing a King but Denmark must owe England millions.
Posted by Falling on a bruise at 00:30