HG Wells: War Of The Worlds 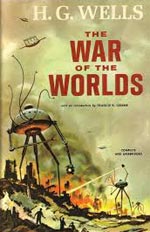 There are some books which are just so famous that you just accept that they are classics and HG Wells 'War of The Worlds' is one of them.
With a background of invading Martians killing the puny humans with heat rays, it ticks all the boxes and it kicks off right from the first page with the invading aliens landing in a field.
The book can be broken up into three parts with the first part, the initial invasion, then a middle section where the narrator who is never actually named runs around hiding from them and then the final chapters where the Martians succumb to the Earthly viruses, bacteria and microscopic organisms that humans have grown immune to.
Parts 1 and 3 with the aliens generally stomping around and destroying everything are great, the middle section not quite so much and though it may seem out of place say such a thing about a classic book, the middle section is quite boring and adds nothing to the story as the unnamed narrator moves around from house to house hiding.
As happens over time, i read this book in my teenage years and forgot the forgettable middle 100 pages or so and you could literally skip over the middle pages and not lose anything from the story as the most memorable bits are at the start and the end.
Quite rightly a classic and written in the very late 19th Century before human Space Exploration so you can see why Victorians would believe that there were aliens up there looking to take over our lush, blue planet and i would say read it just because it is that famous but if you 'accidentally' skip the middle 100 pages, nobody would notice.
Posted by Falling on a bruise at 19:25