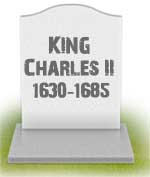 Britain had many monarchs before and after me but i must be Britain's most loved because they restored Kings just so i could rule over them.
My dad lost his throne, they chopped off his head and on the day of his execution he wore two shirts because he didn't want his subjects to mistake his shivering from the cold as a sign of fear, probably should have worn two pairs of underpants as well.
After he lost his head, old Oliver Cromwell ruled over the land but he wasn't a Jolly Olly and the only thing that stopped him being as miserable as sin was that sinning was not allowed.
Being a Puritan, he ran the country on religious lines and as the religious back then were as much fun as arse boils, he banned most things saying God wouldn't approve so when he died the people rose up and screamed 'Bring Back Charlie'!
So i was back and i set about reinstating Christmas, make up, football and even plays and the grateful people named a dog after me, the King Charles Spaniel.
Luckily the public were distracted by the Great Fire of London, playing football and hanging Christmas decorations so they never noticed that i was not a great lover of the wedding vows, and despite being married i had affairs with Lucy Walter, Nell Gwynne, Moll Davies, Barbara Villiers and Hortense Mancini but nobody cared what i did with my own crown jewels as the other ones were back in the Palace.
After i died several statues of me where erected but for the life of me i don't know why there are ones depicting me in ancient roman dress, i was about as Italian as a teabag.
Posted by Falling on a bruise at 00:30