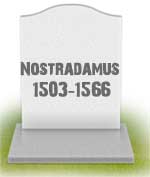 Of course i knew that Lucy was going to ask me to write a guest post on her blog but then knowing things before they happen is my game.
In 1555, i predicted the Great Fire of London, the French Revolution, Louis Pasteur's Discoveries, the rise of Hitler, nuclear weapons and even the assassination of JFK although some of my lesser known predictions do not gain quite so much attention.
As well as predicting Vanilla Ice, i got Tamagotchi's and even Ginger Spice leaving the Spice Girls but there are some big things i missed but that was because my visions came to me in the form of dreams.
One criticism was that i never got the birth of America but that was because the Pilgrims were haggling over the cost of the Mayflower when i woke up desperate for a pee.
When i got back to sleep afterwards, my dream was then about Madeleine de La Tour d'Auvergne doing something interesting with an aubergine so it kinda got missed out.
It was the same with WW1, the Archduke Franz Ferdinand was looking at a road map of Serbia and whoops, gotta pee, and then the dream was about Galileo Galilei sitting on a chair while suggestively eating a carrot.
Aside from my predictions, i had a neat little sideline where i would sell rose pills as protection against the plague which was ravaging Europe at the time.
You don't need to have the power of prediction to know that a pill made from crushed roses really shouldn't have worked and surprise surprise they never, even my own wife and children dying of the plague, which moved me greatly, moved me to Southern France actually where i married a rich widow and died of gout years later.
If i had known that people would still be paying attention to my book 500 years later i would have written it better and if i had known people would still be believing it, then can i interest you in some plague stopping rose pills?
Posted by Falling on a bruise at 00:30